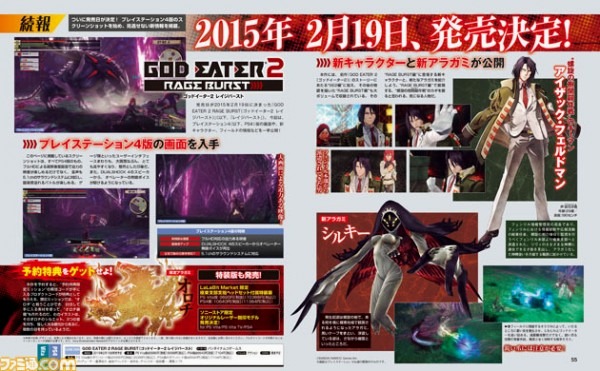 Find the details below.

Isaac Feldman (voiced by Hiroki Yasumoto) - Director of the Fenrir Information Management Administration Office. He is sent to the far eastern branch of the organization from the headquarters of Fenrir. In addition, he does not have eyebrows.

Silky - A new Aragami that appears in the spiral tree. He floats and wears a black cape and attacks with his sharp claws, as well as a long-range attack that engulfs the region in blue flames.

Free Downloadable Survival Missions from the previous game will include camp scenes between battles. In addition to preparing for the next battle, these scenes also allow you to see your companions relaxing at the camp.

A new system of "personal capacity" will allow you to train your companions as you please. "Ability points" are accumulated by taking your companion on a mission, which can be used to acquire new abilities.

God Eater 2: Rage Burst will be released on PlayStation 4 and PS Vita on February 19 in Japan.