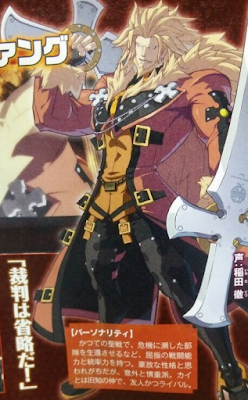 Famitsu confirms this week that Leo Whitefang will appear as an additional character downloadable in Guilty Gear Xrd: Sign.

Leo, voiced by Tetsu Inada, is one of the kings of Illyria and is dubbed the "Lion King with Two Swords". He is a friend and rival of Ky and faces a new threat hiding at the gates of his kingdom. You may have noticed Leo in the Tokyo Game Show trailer or on his box.

The magazine also reveals that a Guilty Gear Xrd Tournament Support App will be available for smartphones. It is supported by the PlayStation 4 version of the game and allows players to create their own tournaments, check details and results and receive alerts when matches start.

Also mentioned: a single multiplayer lobby in Guilty Gear Xrd can accommodate up to 64 people. Players will be able to talk to each other via a short chat function.

Guilty Gear Xrd: Sign will be released on PlayStation 4 and PlayStation 3 on December 16 in North America and December 4 in Japan.