Luigi’s Mansion Arcade will be released Summer 2015 in Japan 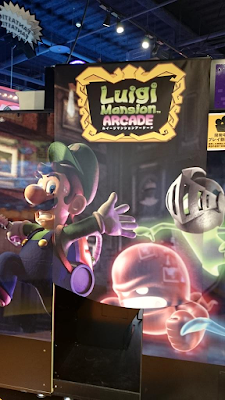 One of them, Mimutsu, provided a particularly detailed report on what was available. For starters, the game apparently has a screenplay, although it seems to be a redux of Luigi's Mansion 2 on 3DS. Either way, Professor E. Gadd remains on site for both tutorials, as well as to inform players of various details during the game.

The game itself is played with an optical gun controller designed to resemble the brand's Poltergust vacuum cleaner, including the part where the nozzle is rectangular. Two buttons are affixed to it, a standard trigger button and a flashlight button. A third button, present in front of the screen, allows to start the game and to trigger bombs. As usual in the franchise, aspiring ghosts remains the goal of the game and is accomplished by shaking the controller from left to right. For the moment, there is no support for the gun controller on the arcade unit; players simply place it above the panels in front of the screen once their game is over.

The only place players could visit during the location test is Gloomy Manor, which originally appeared in Luigi's Mansion 2. There are however divergent paths on the stage, which one can divide between the first and the second. the second floor of the stage and then a second split later. Although the game is played in the first person, cinematics are scattered throughout the game and Luigi still maintains his manners, making his presence an important part of the process. The location test results screen apparently gives the impression that the game may have three distinct levels, but no explicit confirmation has been obtained in this regard.

Finally, according to another Twitter user, Sacchi, Capcom intends to release the full game in Japanese arcades in the summer of 2015.